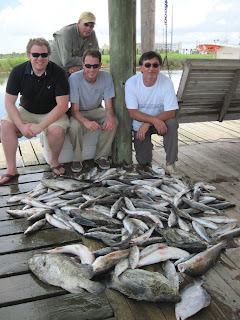 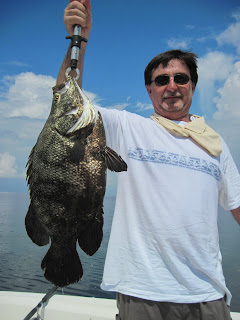 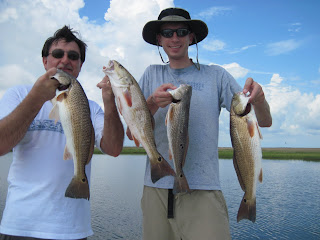 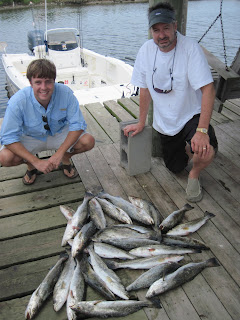 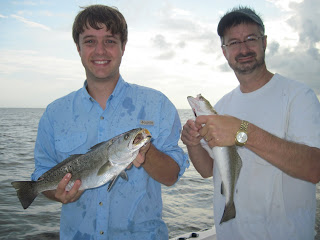 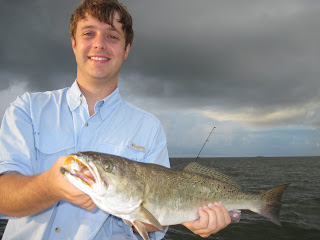 Been at it Friday, Saturday and Sunday(sort of). The weather has kept us on our toes everyday, but we have been able to keep the crews dry. Friday was the father and son team of Brennen and David. Went to the LA marsh early and had a great bite until the first storm got the better of us. Put some very large trout in the box using live croaker and mullet over the shell bottoms. Was forced to move several times, but each time we found more trout. The last move of the morning put us back over the shells and the big bulls found our live baits. Went 0-5 on the bulls, either breaking them off, spitting the hook or getting spooled. Had to make a quick run to the Cat Island house with Capt Kyle's crew to dodge a very large storm. The customers were blown away with the house. FYI we have updated the website www.shorethingcharters.com so anyone can check it out(look on the lodging link). Ran buoys with Capt Kyle on the way home. His crew found triple tail, my crew did not. Did return to the dock with 24 big keeper trout.
Saturday, actually had a no show, have not had that happen in a long time. Was able to grab a dock rat, aka Capt Poot to run to the reefs for an hour before the weather got us. Put half a dozen MS keeper trout in the box, tucked tail and ran. Was speechless when I returned back to the cleaning tables. It seemed Capt Matt and Capt Kenny literally loaded the boats with keeper school trout specks and massive whites. Between the two they had over 100 fish for the Ledford/Douglas crew.
Today Capt Kenny and I had the Ledford/Douglas crew for day two. Two anglers per boat and the fish were right where Capt Kenny and Capt Matt left them the day before. Pretty cool to see that many school trout ganged up in a bay like that. The shrimp and minnows were pinned in, and the trout were in a feeding frenzy. Used all plastics either under the popping corks or tight lined in clear patterns for all the damage. My crew(Kevin and Spencer) had their 50 specks before 7:45 AM. We also kept 20 or so big white trout. Capt Kenny's crew(The Douglas boys) would have been done sooner than that, but his guys broke out the fly rods! After the trout killing spree we split up for a few hours. Capt Kenny's crew opted to go look for triple tail, and my crew redfish. We checked out 3 small lagoons in the 3 mile area, and all had fish. We missed plenty but used the finger mullet under the cork to get 5 slot reds and a flounder. I could hear Kenny and the Douglas crew on the radio and they were doing well in the 3 tailed fish department. Sounded like his crew had 4 in the box and had missed several more. Needless to say, we jumped on the band wagon. Only took a dozen buoys before we got Mr. Kevin his first ever triple tail. Storms were building and we had plenty of fish. Met Kenny and the Douglas crew back at the dock to merge the catch. The Ledford/Douglas crew finished day 2 with 100 specks, 43 whites, 5 reds, 6 triple tail and 1 flounder!!! Only got wet loading the boat back on the trailer, not a bad day...
****SHORE THING Fishing Charters****
Check us out on You Tube:
http://www.youtube.com/watch?v=hr0twtm3Bng
With four boats available, small and large groups are welcome. Anglers under the age of 13 fish for free! We supply rods reels, tackle, snacks, drinks, ice, fuel, bait and fun. No charge for fish cleaning and bagging.
Be sure and ask about our all inclusive overnight fishing packages to the Cat Island House!!! For your next fishing trip, give us a call or check us out on line. www.shorethingcharters.com or 228-342-2206