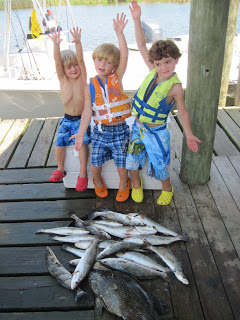 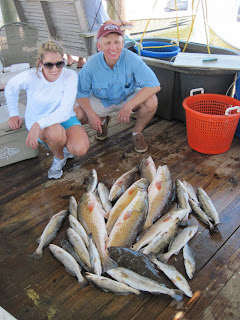 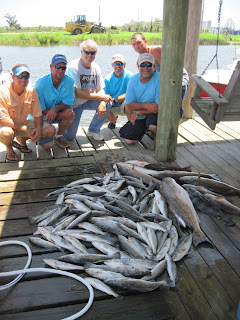 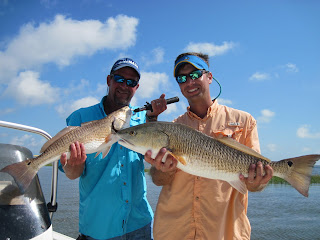 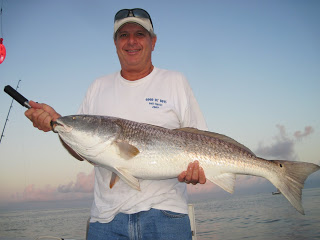 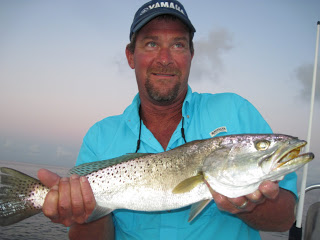 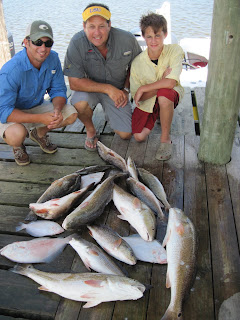 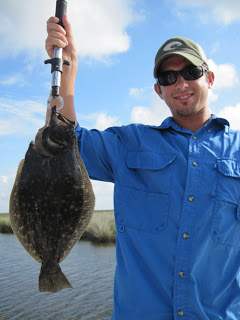 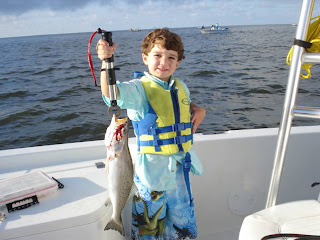 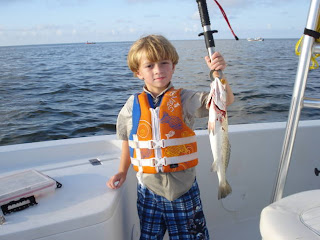 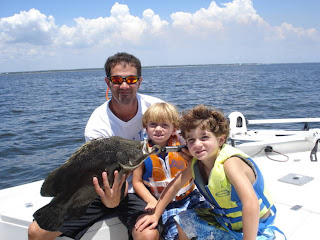 One tough day, one easy one, but some very good crews on the boats. We have run 8 trips in the last two days,and Good Lord have we covered some water. Friday I had the Crochet family(Shane, Brennan,and Cullen) along for the ride. Weather was horrible, but Shane still wanted his boys to wet a line. We made the ride to the LA Marsh slowly, safely and landed in the 9 Mile area. Windy and high water, so we went after the redfish. Used live shrimp and finger mullet under the popping cork all day long. Pounded banks in ponds from 9 mile to Lake Borgne. Shane and his boys have done this type of fishing before and it showed. Putting the baits against the grass put a good mess of reds, and flounder in the box but we needed a few more to top it off. Put the rally caps on and hit half moon island on the way home. Prettiest water we saw all day, and the most bait. Found a few small bulls and some nice specks. Ended the day with 10 big reds, 4 flounder and a few trout. Considering the weather, very proud of the crew and the catch. The other boats returned to the dock with fish, but everyone had to work hard for their catches.
What a difference a day makes... Today was flat calm and the fish were hungry. I had one half of the All South Group(Travis, Ray and Todd). The trip was set up by David Allen of Long Beach for some of his work associates. We got an early start and made it to the shell bottoms in the LA Marsh in record time. Capt Kyle and the other half of the crew got the jump on us. Fishing was good for the first hour of the morning, but began to slow with the traffic. All of the big trout came off of live finger mullet on the carolina rig. Did sneak one big bull red but the constant parade of boats put the brakes on the bite. I think Capt Matt said it best over the radio, "it is flat calm, but there is a steady 2 to 3 foot chop with all these boats moving around". Too many tree stands in the food plot so we moved around the marsh looking for the bigger and better deal. We found it in a lagoon I have never fished. The boys and I had the school trout pinned against the banks for the next hour an a half. Capt Matt and Capt Kyle joined us for a while as well. Just 10 trout shy of their limit, they opted to look for some reds. The fish Gods were smiling on this crew. The first few casts against some flooded broken marsh put several perfect slot reds in the box. Every few minutes would get them another red, until the ice fish ratio was way off. Long on fish and short on ice, we hooked it north. Ran plenty of buoys, but never saw a triple tail. Got back to the dock with 65 specks, 9 reds and 1puppy drum.
Heard Capt Kenny and the Doxey crew on the radio all day long. Young Abe an Oren had so much fun a few weeks ago, that their dad brought them back down. I think the entire marsh heard the screams of agony when they broke off a gigantic stingray, while shark fishing. The boys settled down when Capt Kenny and their dad got them on an even bigger one. Saw them back at the cleaning table with a fine pile of big trout, and one big triple tail. Hands down one of the most entertaining group of young anglers in the Shore Thing family.
All of the Shore Thing Captains will be in Jackson for the extravaganza the weekend of August 5,6 and 7. If you are in the area or plan on attending, please come by our booth and say hello...
****SHORE THING Fishing Charters****
Check us out on You Tube:
http://www.youtube.com/watch?v=hr0twtm3Bng
With four boats available, small and large groups are welcome. Anglers under the age of 13 fish for free! We supply rods reels, tackle, snacks, drinks, ice, fuel, bait and fun. No charge for fish cleaning and bagging.
Be sure and ask about our all inclusive overnight fishing packages to the Cat Island House!!! For your next fishing trip, give us a call or check us out on line. www.shorethingcharters.com or 228-342-2206