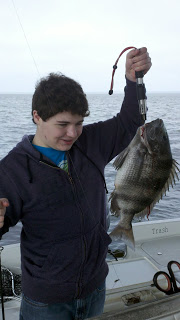 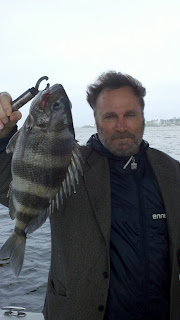 Angry seas today due to the stout 20knot east winds. Capt Kenny Shiyou, who is as tough as John Wayne was the only boat out today. Captains Kyle, Kenny and myself got in very late last night from the Batesville Sportsman Extravaganza(freakin awesome show by the way).Only able to fish the leeward side of Bay St Louis, Capt Kenny manned up, put on his big boy britches and set out on a late departure. Funny, the guy he had on the boat today more than likely was in a few movies with the late great John Wayne. Italian born movie star Franco Nero is in town, filming a movie in New Orleans. Joining him was his buddy, local boy John Scialdone and his son Christopher for a quick near shore trip. Normally we would cancel or reschedule, because of such poor weather. Both adults have fished with Capt Kenny before and knew that he would keep them safe while trying his hardest to find fish. Capt Kenny went the extra mile today, knowing this was the only window they had to get on the water. Well informed to the sea conditions, they gave Kenny a go ahead for the trip. Kenny ran his 24 Sea Hunt across the Bay and picked them up in Pass Christian. This avoided putting anyone in open water. My man Kenny says it best, "I ain't afraid of the sea, but I dam sure respect it". From there on out it was semi protected water and the best possible hand of cards he could deal, PILGRIM!.
Only able to fish just a couple hours, the crew told Kenny they wanted 3 fish for dinner. They got that and then some, even in less perfect conditions. They boys kept 8 sheepshead, and 1 flounder before they had to leave and get back to work. Big news of the day was some of the "other catches" Kenny reported in with. He said the hard head catfish were thick, as were the ground mullet. Anyone who follows the patterns of spring time trout fishing, knows this a good indicator the trout are next to show. Last year, due to the cold winter, this did not happen till mid April. Don't know why this happens, but we have not boated a catfish or ground mullet in months. This is the only time of year when we are happy to catch catfish. Happy to see them here early, it puts a perfect bulls eye on April trout fishing in the marsh. Until then we will be working on what ever is biting best PARDNERs!

****SHORE THING Fishing Charters****
Check us out on You Tube:
http://www.youtube.com/watch?v=hr0twtm3Bng
With four boats available, small and large groups are welcome. Anglers under the age of 13 fish for free! We supply rods reels, tackle, snacks, drinks, ice, fuel, bait and fun. No charge for fish cleaning and bagging.
Be sure and ask about our all inclusive overnight fishing packages to the Cat Island House!!! For your next fishing trip, give us a call or check us out on line. www.shorethingcharters.com or 228-342-2206