Been doin it to it in the LA marsh the last few days. Wednesday was the first time I have been to the marsh in a while. For my re-introduction to the marsh was my buddy "Uncle" Jessie McMicheal, Tug Boat Joe and Mitch, all from Petal, MS. Landed on big trout, just no big numbers. Wind picked up to a stout 20+mph and sent us looking for the redfish. Got 3 but Joe ha 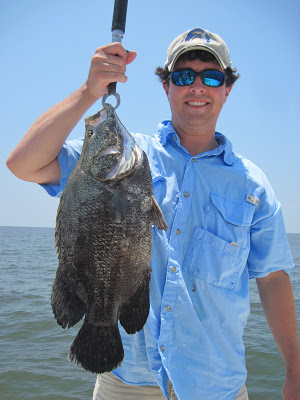 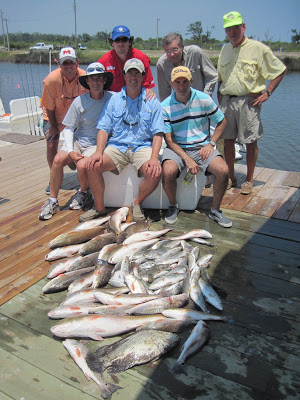 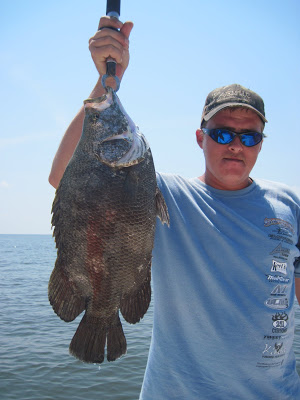 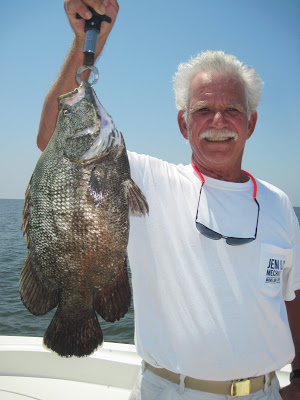 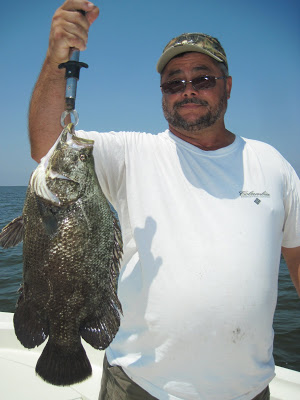 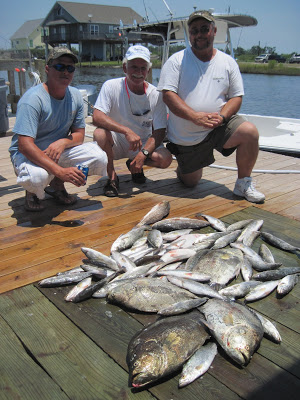 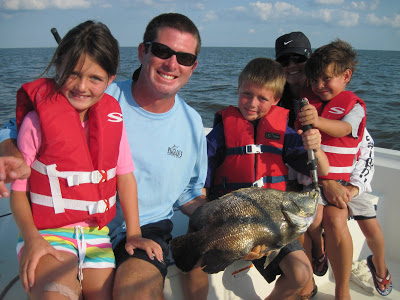 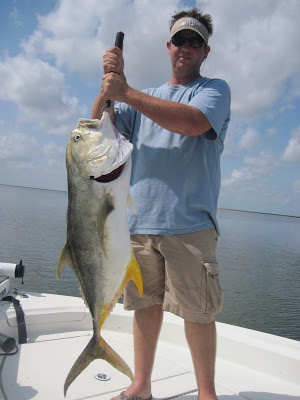 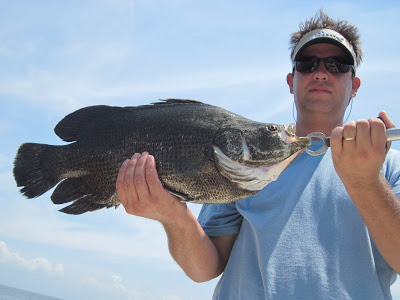 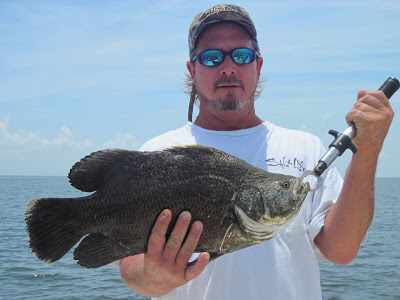 d to earn his. He casted a spoon over a section of marsh into another pond. He hooked a keeper red and had to drag it back over the marsh. Was a nice show from tug boat Joe, and always a good time with Uncle Jess and Mitch. No records were set that day, but got plenty enough to make the grease stank. Thursday was Blaze, back yet again, with Merlin and Darrell. We had to work all day but put a box together. I don't think we caught more than 4 trout in the same spot all day. Did find nice slot reds against the flooded grass with live shrimp under the popping corks. Saw three triple tail. Caught two, one of which we tagged. Saw a studd in MS waters, but had to let it walk. Had fish that did not meet MS standards, rules is rules... Friday was a two boat trip with the Doug Minor, Capt Matt had the other crew. Doug, Wilson, Henry and Tony were one of the more easy going crews I have ever had. We were able to fish for reds and trout in the same areas at almost every stop. Put a good mess of fish in the box through blood, sweat and cheers. Most of the fish came off of live bait under the corks. Wilson landed a 30lb bull red after 5 laps around the boat! Did hook 3 triple tail, two spit the hook, but Henry did land the biggest of the three. Met back up with Capt "Magic" Matt. Seems his crew stirred up a nest of hungry slot reds. In 45 minutes they got their limit. To top it off, the last fish was snagged off a cork it was connected to(not Matts). Heck of a way to end it. We closed with 32 specks, 27 reds, 1 flounder and 1 triple tail. Saturday had to work a double, good thing it was only 103 degrees. The morning trip was with the World Famous JEM Mechanical crew. Always a good time with them boys. Had Dr Dave, Henry, and Terrel along for the ride. Tried something different and went to look for deep canals draining into shallow bays. Payed off with a mess of school trout, and good action. Used the live bait to find the schools and then the soft plastics to work on them. Been using the Marsh Works Bayou Thumpers in Croakaine and Salt N Peppa. Also been using the new toys the good folks at Okuma sent down. The new Helios spinning reels are a treat, and hold more 20lb braided line than you could ever need. The boys did well on the trout, and we probably kept 1 for every 4 we caught. Did get close to one pretty section of broken marsh and the boys tripled up on perfect sized slot reds. Got all three in the boat. Went looking for triple tail and went 4 for 4 on nice ones. Don't know why, but all four were incredible fights. The fish jumped, ran the guys around the boat, and just went nuts. Ended the morning with almost 50 specks, 3 reds, 4 triple tail, and 1 flounder. Had just enough to clean their fish before another one of our best corporate customers showed up for an afternoon trip. Nathan Guice brought his whole family(Missy, Sid, Tyler and Deacon) for a quick trip. Just needed to put the young uns on some fish for a bit. Found diving birds in the LA Marsh in one drain that never moved. More throw backs than you could imagine, but the kids had a great time. Caught 20 keepers and most likely tossed back over 100 trout. Promised them we would try for triple tail on the way home. Only saw one fish and young Tyler got to catch his first ever triple tail! Couple of hours of sleep and back at it again Sunday. Had John Ainsworth and buddy Steve for a day in the Marsh. Fish were a little shy and not in the numbers from Saturday. Never found the reds, and our bird trout holding areas became catfish laden. Them boys could fish, but we had to pick though a pile of trout to get what keepers we had. Did find a few held up in some deeper holes inside the marsh using carolina rigs with live minnows and shrimp. Even got bested a big Jack "Cheverolet" an a nice black drum in the process. Picture perfect conditions for triple tail hunting in the mid day. Saw two right off the bat, missed one but then John got his first ever. We must have covered 20 miles before seeing another one. Steve perfectly pitched a live shrimp to the fish, and got his first ever. Ended the long hot day with 27 keeper specks and 2 big triple tail. Saw Capt Magic Matt at the skinning shed, and it looked the big trout were very kind to his group... ****SHORE THING Fishing Charters**** The finest inshore fishing on the entire MS Gulf Coast. Specializing in speckled trout, red fish, flounder, triple tail, black drum and more! We fish the Louisiana Marsh, the Mississippi Barrier Islands and many other areas. Our full time fishing guides are extremely knowledgeable, courteous, and professional. With four boats available, small and large groups are welcome. Anglers under the age of 13 fish for free! All of our boats and guides are licensed to fish in Mississippi and Louisiana. We supply rods reels, tackle, snacks, drinks, ice, fuel, bait and fun. No charge for fish cleaning and bagging. Be sure and ask about our all inclusive overnight fishing packages to the Cat Island House!!! For your next fishing trip, give us a call or check us out on line. www.shorethingcharters.com or 228-342-22o6 Check us out on You Tube: www.youtube.com/watch?v=VdJjkK7ldsk&context=C497653dADvjVQa1PpcFOwoDwX2vSzY4P5FRg4Nz-_nX2fhO9IImg 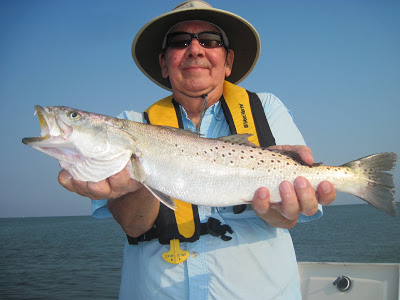 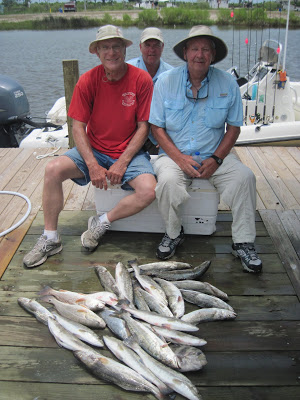 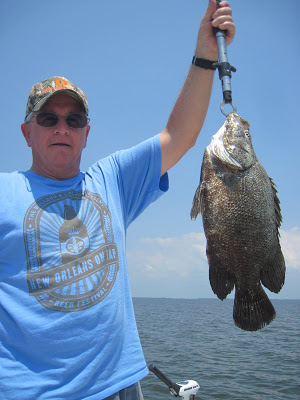 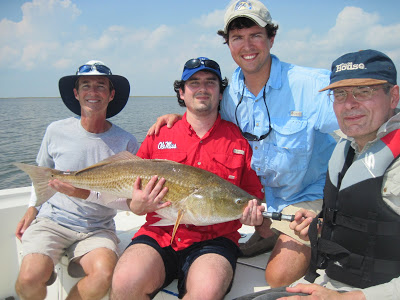