Good enough weather, great friends, good times and fun fishing... Monday one of my favorite crews, the Striblings were back yet again. Dad, John brought both sons, Alex and my man Charles. I promised Charles a long time ago that we would go shark fishing. John set it up, and had a good request. Trout would be first thing, and then shark fishing for the boys. Got dow 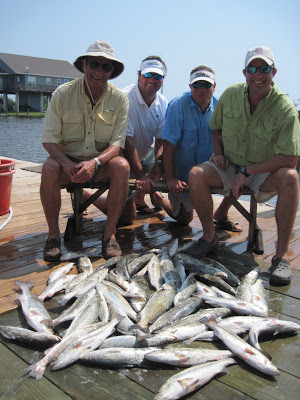 n to Shiyou Cadddy early in the dark to throw the cast net. Took 5 throws to fill a hamper with about 40lbs of pogies for chum. It was a bit windy and bouncy on our way over to the LA Marsh. Had to duck behind a few islands to get out of the elements. Joined Captains Kenny and Kyle over some shells, and caught some very nice speckled trout. Got Dad enough trout for a couple of meals before the boys were about to explode with excitement of fighting JAWS. Set up near Isle Au Pitre and got to chumming. Charles was a big help, I am sure those clothes he wore had to be burned, he was ripe! Took only a few minutes before the black tip sharks moved in. Used piano wire rigged carolina style with cut lady fish, it got bit every time.The boys did great with the big rods, and fought the fish like seasoned pro's. One funny thing that amused me was the number of boats that ran up on us to fish our chum slick(diving birds) from all the floating pogies. Gave me a chance to show the boys how some of the others boaters etiquette was incorrect. I never mind boats fishing next to mine, I enjoy the company, as long as the approach is done correctly. Use the wind or the trolling motor so everyone can stay on the fish. Stepping off the soap box... John and the boys have never caught a triple tail, so when the wind layed down, the hunt began. Water got clear, wind layed down and the tide was moving very slow. Proud to report, Charlie an Alex got there triple tail. Lil Charlie got three, and big brother Alex got one. Did see two free swimming fish one of which we caught, pretty cool. At the dock, Charles gave me one of the coolest gifts ever. His mom delivered a broken glass mosaic of a sail fish for me. It even said #1 CAPATAIN SONNY. Had to hold back the water works, for a 10 year old to do that for me was almost too much to take.That little dude reminds me very much of someone I knew 25 years ago that was ate up with fishing... Thursday was another great trip, in both catch and clients. Had Ryan Quinlan his dad Dr Bill(Birthday Boy) and friends Andrew and Scott. On the way out of the Bayou Ryan let me know, "Big trout and home early Capt". They had all been down in Shell Beach the last few days and had plenty of fish in the freezer. Home early I can do, but we have been catching nothing but school trout the last 5 days. Had the live wells full of big shrimp and minnows. It was actually calm so we set up over the shell bottoms with moving water. This seasoned crew came to play hard and fish hard. When we set up over the shells, the big trout were smashing jumbo shrimp all around us, the fish did not stand a chance. Used the live bait on carolina rigs as well as popping corks with clear soft plastics. Never got on the every cast bite, but had a fish on every few minutes. Bite ended when the tide slowed down and the boys were content. 47 fat trout were in the box and they wanted the boat heading north. Talked them into looking for triple tail for a little while, it was too pretty of a morning not to. Only saw one fish, and did not get it. Got done early since the boys helped me clean fish, not a bad day at all... 4th of July Wednesday had Brennan Marlowe and his buddies Tamara and Bock(first fishing trip ever). Brennan made the entire morning all about them and was just there to help. He an I would cast live baits over shell bottoms and let the two newbies reel in the trout. In true Marlowe fashion, Brennan stopped keeping fish, about a dozen trout and wanted to let them catch something else. Since I still had all my shark tackle on the boat, it was a no brainer. A cut up ladyfish lasted all of 5 minutes before a nice black trip smashed it. We let Bock reel it in, it freakin blew his mind! Minutes later, Tamara got to reel the "French Tuna' aka Jack Crevelle. Soon there after, we began the triple tail hunt. Only saw two, but hooked them both. One spit the hook, and one was a tag and release for Brennan. Thursday was the Graham Group from Brooklyn, MS. Zach, McKinley, and Jackson were in town with their Dad. The boys dad fell ill, so we were a party of three. They could have cared less about trout, they had shark on the brain, That's right, 3 shark trips in 3 days. We hooked a monster today, it jumped and got wrapped in the line. Did get all three boys a nice black trip before heading in. As luck would have it, we did go 1 for1 on the triple tail, Jackson got him. ****SHORE THING Fishing Charters**** The finest inshore fishing on the entire MS Gulf Coast. Specializing in speckled trout, red fish, flounder, triple tail, black drum and more! We fish the Louisiana Marsh, the Mississippi Barrier Islands and many other areas. Our full time fishing guides are extremely knowledgeable, courteous, and professional. With four boats available, small and large groups are welcome. Anglers under the age of 13 fish for free! All of our boats and guides are licensed to fish in Mississippi and Louisiana. We supply rods reels, tackle, snacks, drinks, ice, fuel, bait and fun. No charge for fish cleaning and bagging. Be sure and ask about our all inclusive overnight fishing packages to the Cat Island House!!! For your next fishing trip, give us a call or check us out on line. www.shorethingcharters.com or 228-342-22o6 Check us out on You Tube: www.youtube.com/watch?v=VdJjkK7ldsk&context=C497653dADvjVQa1PpcFOwoDwX2vSzY4P5FRg4Nz-_nX2fhO9IImg 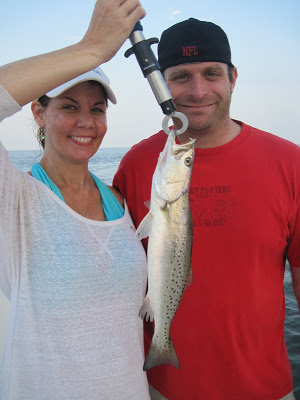 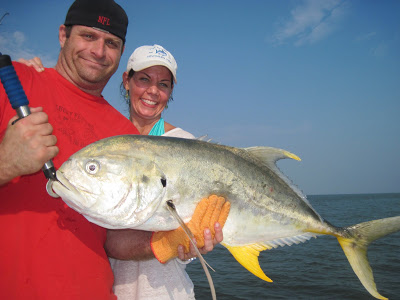 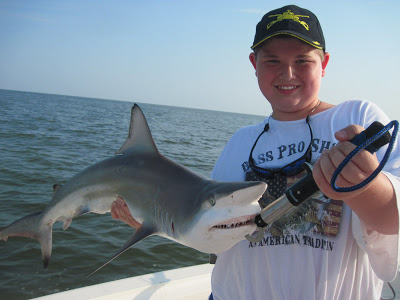 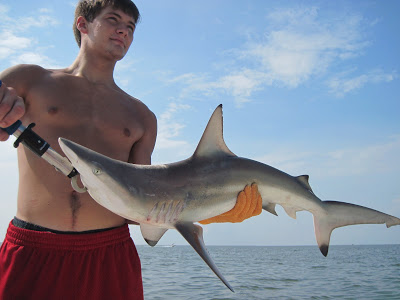 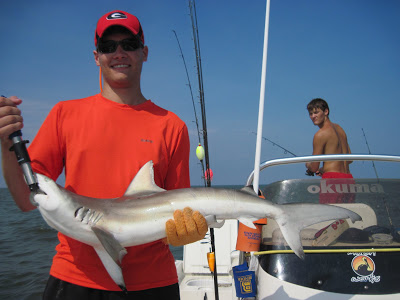 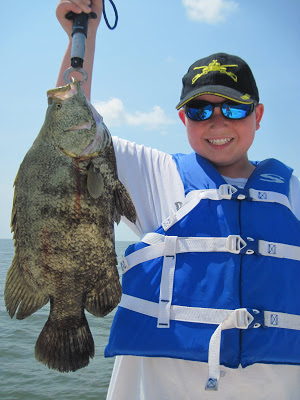 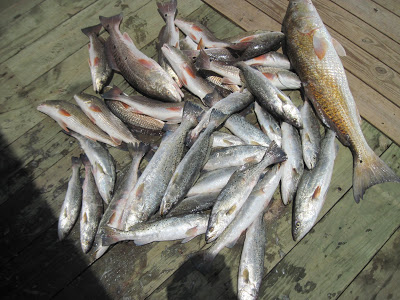 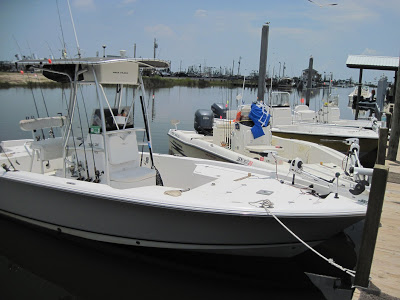 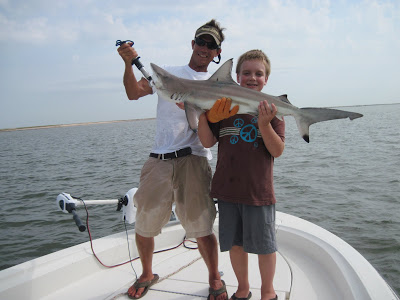 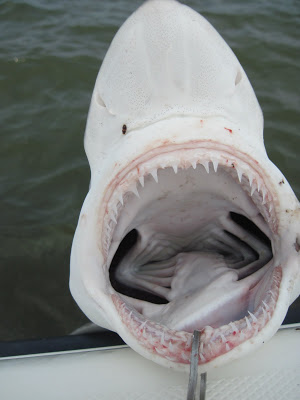 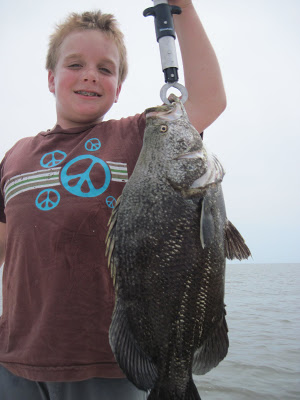 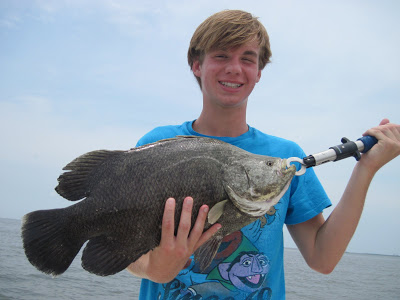 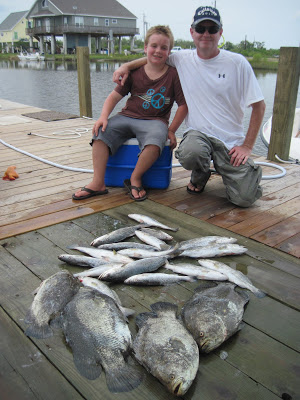