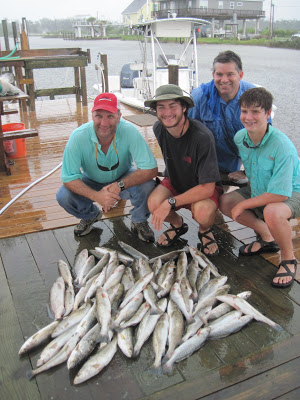 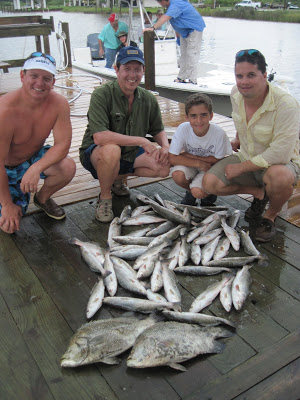 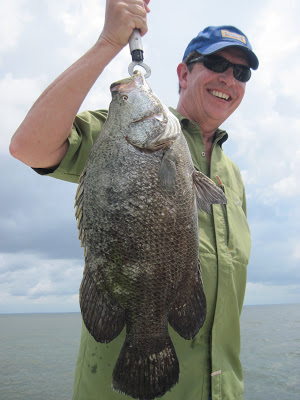 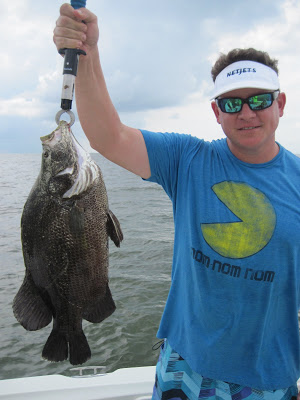 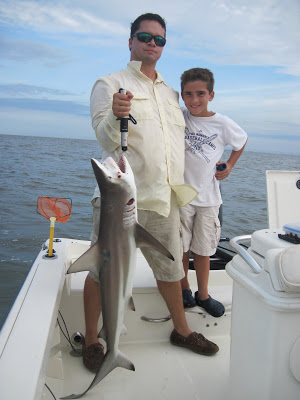 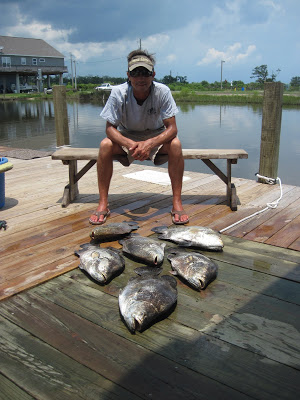 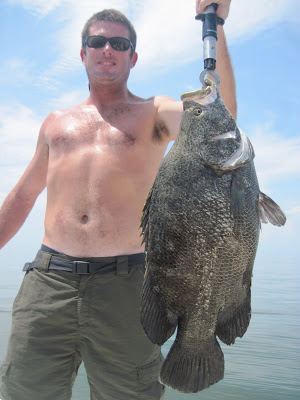 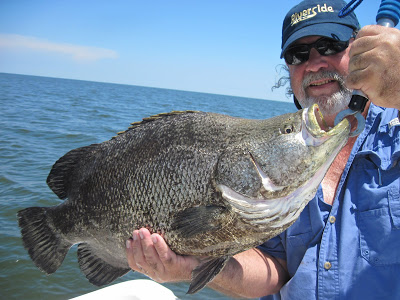 Fantastic couple of days despite the weather. Really having to play the hand we are being dealt by momma nature. Tuesday had the crew from Riverside Flyshop near Birmingham, AL. Randy, James and Scott brought the bamboo poles down for a little pull. Did make it to the marsh and found some fly action. Never did get them a trout, but they had plenty of fun with the ladyfish. Talked them into using the "idiot sticks" to get some trout for the cause. Spent way too much time looking for redfish on the dirty high tide, but we had to try. Looked all over for triple tail. Only saw one, but it was a Hawg Leg! After dozens of perfect casts with the flys, James finally got it on a live shrimp. Did not have a scale, but I am sure it was over 15 pounds! Wednesday was a long morning at the dock. Storms kept us in the Waffle House or sleeping in the trucks till mid morning. Had Shore Thing Preferred Gold Club member Nathan Guice back yet again. His crew was reduced to just one(him) after our time window was reduced from the morning squalls. Talked Nathan into quick trip before lunch. Never did set any records on the trout, but did do very well on the triple tail. Got a few hours of slick calm water, it actually cleaned up to a not so murky green. Nathan is a pretty good sport, and let me pick off three of the triple tails. Actually we were trying to get double hook ups, but I hooked the first fish each time. All of the fish were hefty, with one well over 12 pounds. For once, my man Nathan did not help me clean fish, but he did bring me a brand spanking new Dexter n Russell tiger edged serrated knife. It made me feel like Julia Roberts in the movie Pretty Woman... Thursday we had all four boats out, and everyone made it home safe(with fish). I had Casey Hoyt, his dad Max, their buddy Mike and his son Alec(10). Not so bumpy in the morning so we went to the LA Marsh. Tide and wind were fighting each other, but we made it work over a few areas with shell bottoms. Capt Kenny and Matt let me borrow some of their Boone and Crockett shrimp, but most of the fish came off of pogies on the bottom. For once, was able to call in Capt Kyle and Capt Kenny in on the bite. Those boys put me on their fair share of fish, it is nice to call them with good news. Most entertaining part of the morning came when young Alec wanted to catch one of the sharks that broke us off. Problem was, the other three adults were on an every cast keeper trout bite. I free lined a big chunk of cut bait out, that lasted all of 3 minutes before a 4 foot black tip smoked it. Lil man and Mike got the beast to the boat, and though we probably should not have, we threw it in the boat for a few pics. Did release that one and 2 more before Casey made everyone put the rods away and start triple tail hunting. Got a little calmer and we saw several nice fish. Missed the first two, but got the second two. Proud to say that they were first time catches for Casey and Max.I had to pull the plug with black skies approaching. The bottom fell out 400 yards from the dock, on the idle into Shiyou Caddy. Called it a day with an even 50 nice trout, two big triple tail, an a few big shark releases for lagniappe. Matt was finishing up at the dock with Shore Thing A-lister Blaze Ernest and his son Christian. They had a mess of trout and two nice triple tail. He was the only one of us that was dry, well played Capt Matt. Capt Kyle and Capt Kenny rolled in last, but had a great box of trout for the two boat Gathings/Russell crew. When we left those two at the marsh we could see bent rods on both boats. Big Thank You to the crew at the Boat House in Lake Shore for relaying weather warnings, via the VHF, to our boats still out in the marsh. We may have gotten a little wet, but it got much much worse after we were safe on land. Sid, Ronnie, Steve and Wally The Shore Thing boys appreciate you guys keeping us safe and our boats running. ****SHORE THING Fishing Charters**** The finest inshore fishing on the entire MS Gulf Coast. Specializing in speckled trout, red fish, flounder, triple tail, black drum and more! We fish the Louisiana Marsh, the Mississippi Barrier Islands and many other areas. Our full time fishing guides are extremely knowledgeable, courteous, and professional. With four boats available, small and large groups are welcome. Anglers under the age of 13 fish for free! All of our boats and guides are licensed to fish in Mississippi and Louisiana. We supply rods reels, tackle, snacks, drinks, ice, fuel, bait and fun. No charge for fish cleaning and bagging. Be sure and ask about our all inclusive overnight fishing packages to the Cat Island House!!! For your next fishing trip, give us a call or check us out on line. www.shorethingcharters.com or 228-342-2206 Check us out on You Tube: www.youtube.com/watch?v=VdJjkK7ldsk&context=C497653dADvjVQa1PpcFOwoDwX2vSzY4P5FRg4Nz-_nX2fhO9IImg=
Uncategorized
ShoreThing Charters
No comments