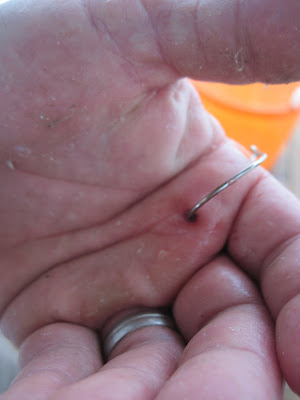 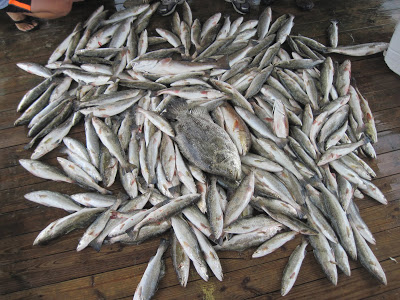 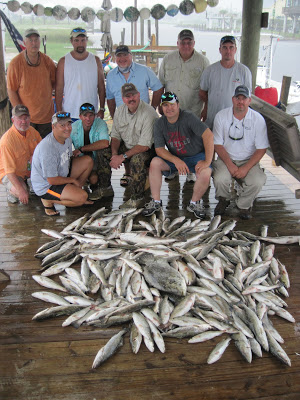 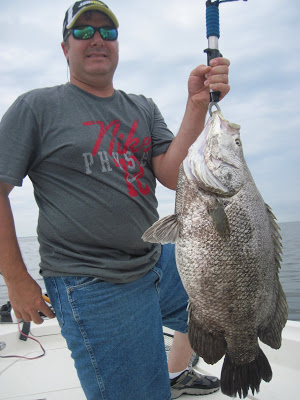 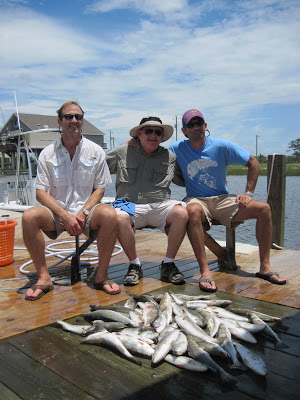 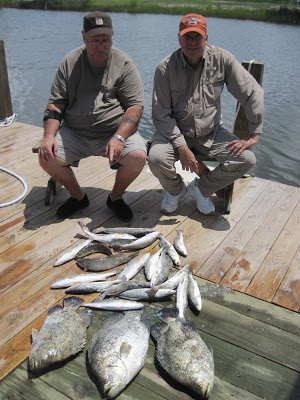 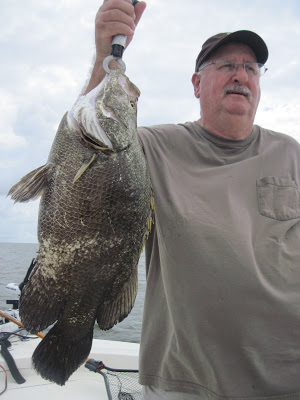 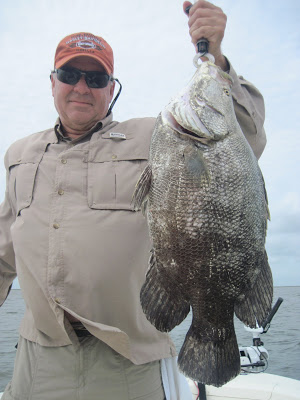 What a Cinderella story Saturday was for 4 lucky boat loads of chicken farmers. We gave the boys a heads up a few days prior that wind, and thunderstorms were forecasted. The crew understood that it may be a wash, but wanted to give it a try. Myself, Capt Kyle, Capt Matt and Capt Kenny wound up taking the Gilbert/Hall group out for one heck of a fishing trip. Honestly, never thought this trip would leave the dock. For once the weatherman got it wrong, but in our favor. Light and variable winds with no thunderstorms enabled all four boats to scream across to the LA Marsh. All the boats set up over shell bottoms and went to work immediately. Fishing close to each other, in little to no wind, you could hear each group screaming and yelling when big trout would come over the sides. It was a hustle, knowing the bad weather would sooner or later get us, but the fish were hungry. All four boats landed on the fish, and stayed put for a good old fashioned trout skull dragging. Most of the boats quit trout fishing a little after 9 AM, with full fish boxes. On a sad note, The Mighty Capt Matt took a khale hook to the palm of his hand, minutes into chaotic trout bite. He may rock, but his not made of stone. Capt Matt kept his crew in the fish, and never once mentioned going in early. Capt Kenny even tried to do the string trick, but lets just say the hook stayed with Matt all day. After the trout bite slacked off, all four boats went looking for other stuff. We tried to get a big shark, only to break off a monster and fight a car hood sized stingray for 20 minutes. I could hear the other boats pecking away at more trout and reds. Passed one clump of floating marsh grass with a studd triple tail under it. We could see the rain building over Bayou Caddy, but had to throw a shrimp to that fish. Glad we did, the fish later weighed 14.8lbs on Capt Kennys digital scale! Kenny got some more use out of his scale on a trout that almost went 5 pounds! Even in the rain, this crew was all smiles back at Shiyou Caddy. The final count would be 225 speckeled trout, 5 reds an one big triple tail! Had to send Capt Matt to get that hook removed, while we cleaned a 320 quart cooler full of fish(well played Matt). Sent all 11 anglers home with a gallon of trout fillets each, and some reds and triple tail to boot. Had three boats out Sunday, lil bumpy, but we all caught. It was the day of live wells or live "not so" wells for me and Capt Matt. Capt Kenny was fine with the Bertholot crew, we fished next to him most of the morning. I caught the boys a bunch of minnows before the trip. When I dumped Matts into his well in the dark, I did not realize his drain plug was not screwed in. Well, his discharge line is now full of rotting minnows and clogged, his bait also died. Lucky for him, he had another well full of shrimp and croakers to get his crew on some good trout. I had Tommy McMicheal and Uncle Wayne along for the day. We found trout, just never got on a red hot bite. The trash fish were really enjoying our baits. Only got 20 keepers before the boys let me take them triple fishing. We ran and ran, but finally found some water that was clean and not too choppy. As we saw our first fish, I looked in my well to grab one of the 20 shrimp I saved for triple tail fishing. I was greeted with one shrimp and a dislodged drain plug, karma I guess? Well, the shrimp died a noble death and Uncle Wayne got his first ever triple tail. Luckily the triple tail were in the mood for small minnows, cause we went 3 for 3, two of which ate minnows. Got a bit more rough and were trying to dodged one last storm, so we headed in. Saw Matt and Kyles crew back at the dock. Both groups were all smiles with nice hauls of specks an a few reds. Pretty sure Capt Matts crew got the biggest pile of fish. Not bad for him only being able to work with one hand(hook injury). He is healing fine, the emotional scars may last a while... ****SHORE THING Fishing Charters**** The finest inshore fishing on the entire MS Gulf Coast. Specializing in speckled trout, red fish, flounder, triple tail, black drum and more! We fish the Louisiana Marsh, the Mississippi Barrier Islands and many other areas. Our full time fishing guides are extremely knowledgeable, courteous, and professional. With four boats available, small and large groups are welcome. Anglers under the age of 13 fish for free! All of our boats and guides are licensed to fish in Mississippi and Louisiana. We supply rods reels, tackle, snacks, drinks, ice, fuel, bait and fun. No charge for fish cleaning and bagging. Be sure and ask about our all inclusive overnight fishing packages to the Cat Island House!!! For your next fishing trip, give us a call or check us out on line. www.shorethingcharters.com or 228-342-2206Check us out on You Tube: www.youtube.com/watch?v=VdJjkK7ldsk&context=C497653dADvjVQa1PpcFOwoDwX2vSzY4P5FRg4Nz-_nX2fhO9IImg=
Uncategorized
ShoreThing Charters
No comments