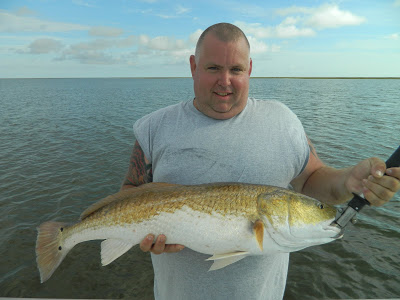 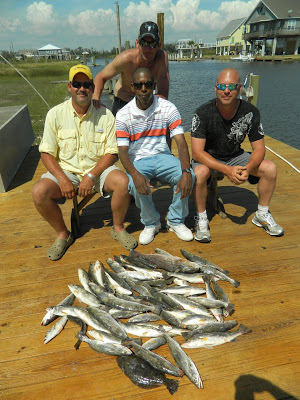 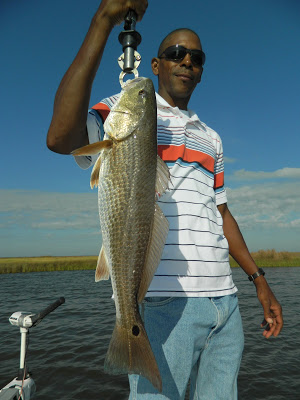 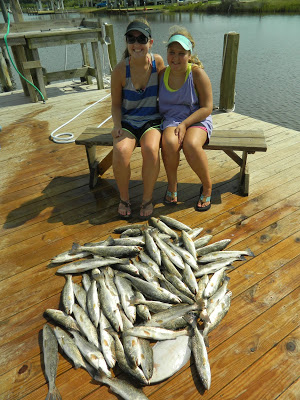 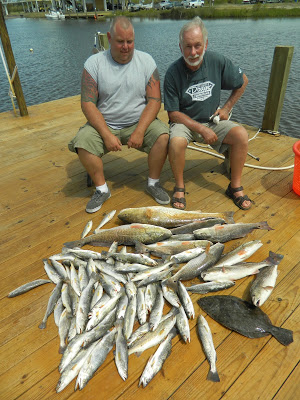 I was able to fish four days last week despite the front and the winds that have not seemed to quit. I ran to the marsh three of the four days. The conditions were less then perfect for the crossing, but still not a bad run across.

The first of the four came last Monday. Don and Kevin have both been with me earlier this year on one of the best trips of the season, so expectations were high. With the cool north wind blowing it felt like a fall morning, and a fall morning means one thing to me, "Good Fishing." We pulled into one of my favorite fall spots and really didn't look any further. We went right to working on trout, not all keepers, but they were coming over the sides quick. We fished that hole until the bite faded, then went hunting for reds. Not much of a hunt though, we landed right on them. We probably caught over a dozen, not all keepers, but some great action. We ended the day with 45 speckled trout, a few white trout, and 7 reds in the box. Oh, I almost forgot, Don likes galftop, so we had 6 of those in the box as well.

The Drew Crew was a big group Capt. Kenny and I worked. Sorry,to many names to remember. With 22mph winds going to the marsh was out of the question. The Drew Crew knew this going into the day and were ok with fishing in the bay. Under the circumstances, we didn't disappoint. Both boats stayed on black drum and red fish all day. The number of small reds in the bay was impressive, I hope that is a sign of our crop for next year. Some of the red fish bites were like trout bites, one after the other. When it was all said and done we had kept 30 black drum and 9 redfish.

My next crew was from Vicksburg. Don, Tim, Larry, and the man we called "Catfish". He for some reason could not stay away from the galftop and hardheads. Like the last trip to the marsh we landed right on the fish. I was impressed, we had to fight the wind and current, so I could not position the boat right, and we didn't have one tangle all day. These boys killed a lot of fish and a lot of beer. It seemed to be the kiss of death landing on the fish first thing, but we had caught enough it made the day one to remember for these guys. We had 44 speckled trout, 15 white trout, a red, and 1 flounder. Tim caught the onely red of the day, he let everyone know it, and I am sure is still letting everyone know.

And the last of the four was Chris and Rusty. We were actually supposed to fish today, but with a forecast of rain we bumped it up a couple of days. This crew had visions of sharks and bull reds in their heads, but those thoughts were cleared when the fish were coming over the side at the first stop. The speckled trout were not as thick as the day before, but the white trout made up for them. My crew was tickled to death. I have never heard grown men giggle like that before. They really started giggling when we got on a redfish bite that didn't seem to quit. We probably caught over twenty, not all keepers, but you throw some keeper trout, flounder, and black drum in the mix and you have yourself in my opinion the best bite of the day. We ended the day with 36 speckled trout, 28 white trout, 9 reds, and 1 fat flounder.

Considering the wind and the horrible tides we dealt with the last two trips, it was a great week of fishing! Give me a call 228-493-9743, it seems like the fall fishing is starting! You can checkout our website, www.shorethingcharters.com, for pictures and keep up with our reports.