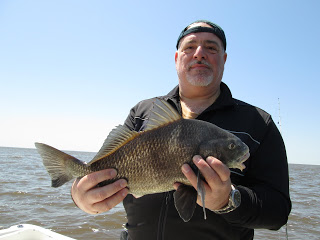 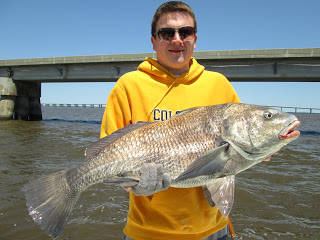 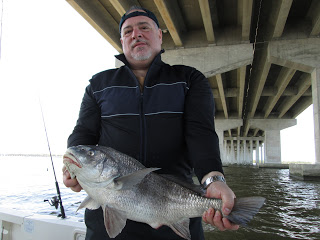 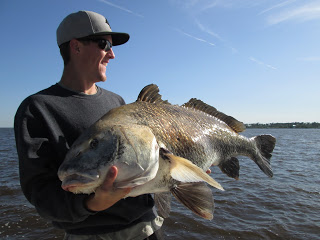 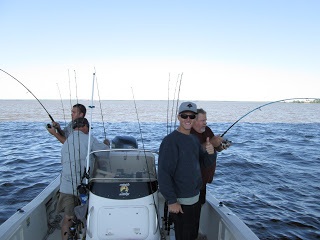 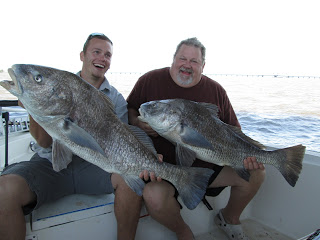 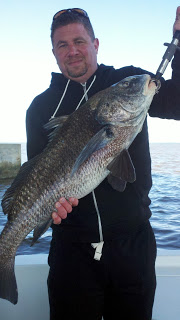 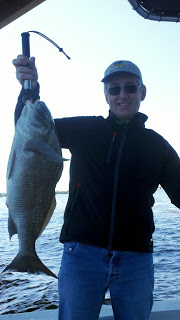 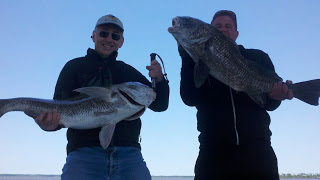 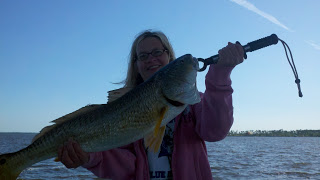 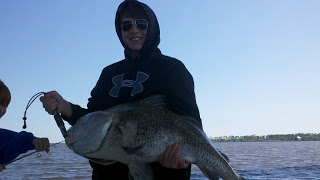 Very fun weekend on the water, we had 6 trips run, even against mother natures attempts to stop us. With the high winds, the trips that did not reschedule, opted to stay in the bay. The crews that fished, were treated to some drag melting black drum and red fish, along with a few random other swimming critters. Since fishing in close was the most comfortable productive fishing, all the crews had a blast in the Bay.

Saturday Capt Jimmy Ray was out with the 2 person Cooke crew. Since we all fished with in spittin distance of each other all day, I saw most of what came over the side of his boat. Did see the mermaid on his boat get the biggest red fish out of all three boats. It was a stick and move plan all day. Usually the drum and reds were 2 or 3 fish at every stop. We just had to make many stops to get it done.

Capt Kenny and myself took the Steve Lewis crew out. This is their second time with us, and last year we were forced in the Bay by the same winds. Steve knew what to expect and was really excited when we told him the big "sea monster" black drum had just showed back up. Did not take long to find them. Capt Kennys boat drew first blood with a sea monster. They got one on their first cast. It took us twice as long(two casts) to get locked into a battle royal with a massive black drum of our own. Both Kenny an I agreed over the radio that these were of the some of the bigger ones we had ever seen, well over 45lbs! We spent the rest of the day grabbing puppy drum, rat reds, and more sea monsters out of the Bay. Our crew was not keeping any fish, but Capt Kenny an I kept a few of the smaller puppy drum for the grease release. One of our favorite past times is cooking puppy drum and not telling people what they are eating. Most people guess red fish or some sort of reef fish. All the big ones get the photo and release, but the little ones are freaking delicious.

Sunday we had another three boats out. Capt Matt joined the fun with the Rebolouet crew. He finished early but he said they got some puppy drum, and did lock horns with a big sea monster. We fished next to Capt Kenny for most of the day. He had a boat load of young anglers on his boat. Jeff brought the whole tribe out for a trip made for youngsters. Having a young angler catch a 30 plus pound drum is one of the coolest things we get to do. He was checking in all day over the radio with Sea Monster reports. They did well on both little and very big drum. My crew was having a good go of it with big fish as well. I had the Svadja boys and their buddy Neil for one heck of a day. Once again the biggest fish of the day came in the first few casts. We were trying to keep up with Kennys crew and it went all the way to the end of the day. The last stop both boats made was the trip maker. Kennys crew was doing battle with their biggest fish of the day when our boat doubled up with gigantic drum. All of the fish were landed, photographed and released. We released 5 sea monsters, pretty sure Kennys crew got 4 or 5 as well. Both crews returned with plenty of puppy drum and sore arms from the sea monsters. The Okuma spinning reels were smoking from the screaming drags, but they did well. All the fish were caught on dead shrimp on the bottom. Ready to get back to the marsh, but having fun in close.

The finest inshore fishing on the entire MS Gulf Coast. Specializing in speckled trout, red fish, flounder, triple tail, black drum and more! We fish the Louisiana Marsh, the Mississippi Barrier Islands and many other areas. Our full time fishing guides are extremely knowledgeable, courteous, and professional. With four boats available, small and large groups are welcome. Anglers under the age of 13 fish for free! All of our boats and guides are licensed to fish in Mississippi and Louisiana. We supply rods reels, tackle, snacks, drinks, ice, fuel, bait and fun. No charge for fish cleaning and bagging. Be sure and ask about our all inclusive overnight fishing packages to the Cat Island House. www.shorethingcharters.com or 228-342-2206

Be sure and check us out on You Tube: